"The "Neighbours" music video feels like the final product of a bunch of fragmented ideas and jokes we’ve had over the years. Beyond the obvious Gulfer/Golfer bit, we’d become obsessed with a Quebecois competitive mini-putt golfer named Carl Carmoni. There is some pretty iconic footage of Carl on a local TV show called “Défi mini-putt” that we loved to laugh at - the amazingly tacky 90’s aesthetic, Carl’s serious and enthusiastic approach to a typically fun, low-stakes activity, and especially the announcer’s unhinged commentary. For some reason, he would yell “birdie” when a hole-in-one was putted, which we found hilarious to the point of almost naming our S/T record “Birdie”, and to the point of reaching out to Carl to see if he was cool with us using a photo of him in the insert of said LP (he was! he even sent us a t-shirt and a DVD, lol). 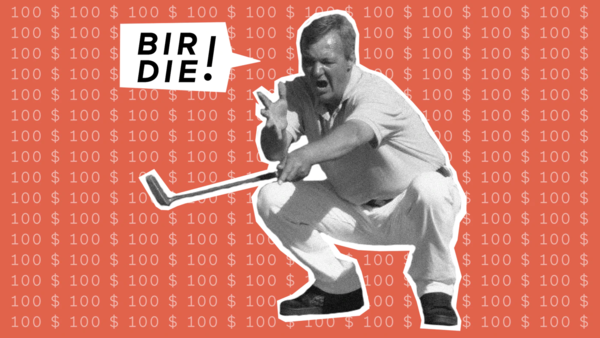 Carl and his appearances on “Défi mini-putt” became a loose inspiration for this video, but we needed some kind of narrative. We came up with the idea of buying a golf putting mat and rushing into busy, iconic landmarks in Montreal, setting up the mat in the middle of everything and having a mini-putt tournament with each other. We were lucky enough to involve our friend Sacha Cohen as a director and the brainstorming continued. Sasha pointed out the many potential logistical nightmares of the concept, so we decided to reconfigure to make all of our lives easier. We came up with the idea of one member of the band dressing up in some kind of exaggerated golf outfit at an iconic Montreal landmark (with the exception of the random tunnel), and have the rest of the band dress up as metalheads who were trying to ruin the shot. A bunch of ideas flowed from there - an exploding golf ball, a lobster costume, and some wild moodboards for golfer outfits.

Our first shoot date was at the Orange Julep, an iconic Quebecois-style diner in a giant orange ball, known for their legendary Gibeau Orange Julep drink and classic old-school car nights in the summer. We ended up spending the entire day there, without any explicit permission from the restaurant, so big shouts to the OJ for letting us do our thing. We had pretty loose plans for the shoot, including an idea involving seagulls that didn’t really pan out, so a lot of the cool footage there happened pretty spontaneously. The main plan was to have Joey set up the putting green in the middle of the busy line, and we were lucky to have a few pals show up as extras so we didn’t have to actually interrupt the lineup of paying customers. Some of our favourite shots happened by complete accident though, like when we approached a bunch of motorbikers and asked them to drive in circles around us, which was pretty appropriately heavy metal.

We shot the rest of the video the next day, starting at a tunnel that was conveniently located next to the Olympic Stadium, which was our next shoot location (and the semi-abandoned site of the 1976 Olympics and longtime home of the Montreal Expos). My favourite memory of that location was having Julien’s partner Sarah dress up in a lobster costume and mess with Vince’s putt.

We shot my scene last at the Tam-Tams on Mont Royal, an infamous weekly gathering around George-Étienne Cartier Monument on the base of the mountain. I’ve probably taken close to 50 touring bands there over the years if they’re around town on a Sunday morning - there are a bunch of hippies in a giant drum circle all day, hundreds of people hanging out smoking weed and selling trinkets, and just up the hill, a LARPing arena where people in full on medieval costumes are having full on battles with styrofoam swords and armour. The initial idea was just to set up in the middle of the drum circle, and then maybe check out the LARP zone and see what the energy was. We had a decent shoot at the Tams but the magic really started when we went to scope out the LARPing arena.

We pulled up to the LARPing arena and I was expecting the action to be full-on, but there were only a few people there. They were all hanging out and had their weapons on full display, but no one was doing battle yet. We were all discussing what our next move would be when one of the LARPers ran at us with full enthusiasm, saw our camera crew and asked if he could help. Within minutes, he was giving Vince lessons on how to battle and agreed to star in the climax of the video. It was another wonderful serendipitous moment that really reinforced how meant-to-be the whole video felt, and a big part of the reason why this is my favourite video we’ve ever made!"