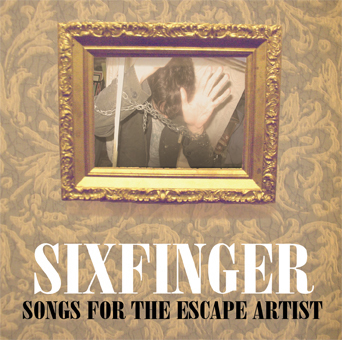 Sixfinger Songs for the Escape Artist

This record is the reason you're reading this right now. It's how Seth and I met, it's why we started a record label and it's how we got more involved with music, our friends and our friend's friends — it's why we look forward to going to work every day.

Seth briefly played guitar in this band and I played drums in it for its duration (2000-2006). As a band, we self-released this EP in the summer of 2005. Seth (whom I had never met at this point) booked shows at local VFW halls and the like. He reached out to us to help us plan a record release show around this album. We didn't meet until a few days prior to the show because the band was on the road all summer leading up to it. When we finally did, we both started brainstorming about ways to help get the album out there more. We eventually decided it'd be a good idea to start a label that would make unsolicited emails or — really showing our age here — Myspace messages a little more viable and appropriate. Thinking back, we were both beyond clueless about anything and everything and I'm sure this conversation would be hilarious to be a fly on the wall for now, but it's what got the wheels turning for this little label.

This record went on to sell thousands of copies despite our complete lack of resources or idea of how to release an album. Most importantly, it gave us the confidence to continue to release more music — we just wouldn't come to realize that for about another year or so.

Anecdote: the person on the cover of the album is Aeroplane, 1929's Alex Mazzaferro in my parents' basement.

physical: download: stream:
If you enjoy Sixfinger, we think you might also like:
August 19, 2005
Topshelf Records
TSR001
Liquid error: no implicit conversion of false into String