Queen of Jeans Dig Yourself

PLEASE NOTE: because of an unforeseen issue with our mail order fulfillment partner, this item will not be able to ship until February 2023. Thank you!

Crockpot Pop. It’s not a term you’ll be instantly familiar with, but it is a somewhat perfect descriptor of Philadelphia quartet Queen of Jeans. Intentionally tongue-in-cheek, the self-ascribed term was coined by the band to chronicle the haphazard nature of their core ingredients. They are a slew of sounds and influences in a juxtaposition that somehow strikes balance, sculpted over time into the refined and tenacious outfit they are today.

Prior to releasing their self-titled debut EP in early 2016, founding members Miriam Devora, Matheson Glass, and Nina Scotto had all played in other bands, but as had been all too common a practice a few years ago, were often accessorized and handed a tambourine instead of a guitar. The three visualized a new project on their own terms, and finalized their lineup with drummer Patrick Wall. Queen of Jeans instantly took root, earning praise for their aforementioned debut that showcased their glowing eye for detail. Along the way, they garnered attention from the likes of Wild Honey Pie, who called it a “welcoming beacon in the night” and Clash magazine, who labeled it a “riot of attitude and colour.” Overwhelmed by the positive response, they vigorously developed their live set, testing it out in their hometown and on the road DIY touring, which eventually led to bigger opportunities. Those included WXPN's XPoNential Music Festival as well as Made in America and SXSW, all of which was rounded off by a full US tour alongside heavyweights Balance & Composure and From Indian Lakes - no small feat for a band with just one EP to its name. Honing their sound through those experiences, the band crafted their debut LP with palpable care and consideration in the time since their first release. The result is Dig Yourself. It is a marked leap forward, a decadent and decisive nine-track record that immediately feels like a coming-of-age. “The more we played, the surer of ourselves we became, but we also continued to encounter a lot of misogyny, “ the band expressed. “After a while, walking into venues to be greeted with comments like, ‘get your hand stamped if you’re the band’s girlfriends’, gets tired. But we didn’t let it deter us, if anything it continued to ignite a new, more assertive energy that has only continued to empower us. With Dig Yourself, we were finding the confidence and willingness to share more vulnerable and emotionally honest music, which served as both a cathartic exercise as well as our call to arms. “This album is really the story arc of a relationship, be it with another person or simply the relationship you have with yourself,” they continued. “We chose an album name with a split meaning - to ‘dig yourself’ could mean to love yourself; rally behind yourself, or on the flip side, ‘dig yourself’ is a motion to try a little harder, find what’s there beneath the surface, explore your behavior and figure out what you’re actively trying to reveal to yourself.” Dig Yourself is as much a reflection of inter-and-intrapersonal relationships as it is the story of the band’s evolution by its own right, exploring the ups and downs of life in its assurance, annoyance, paranoia, resignation, and ultimately re-evaluation.

a hand-picked mix of queen of jeans merch and related titles. view all → 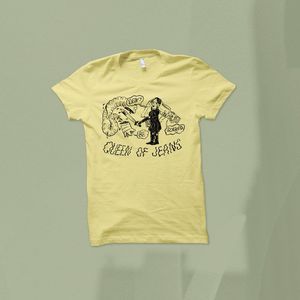