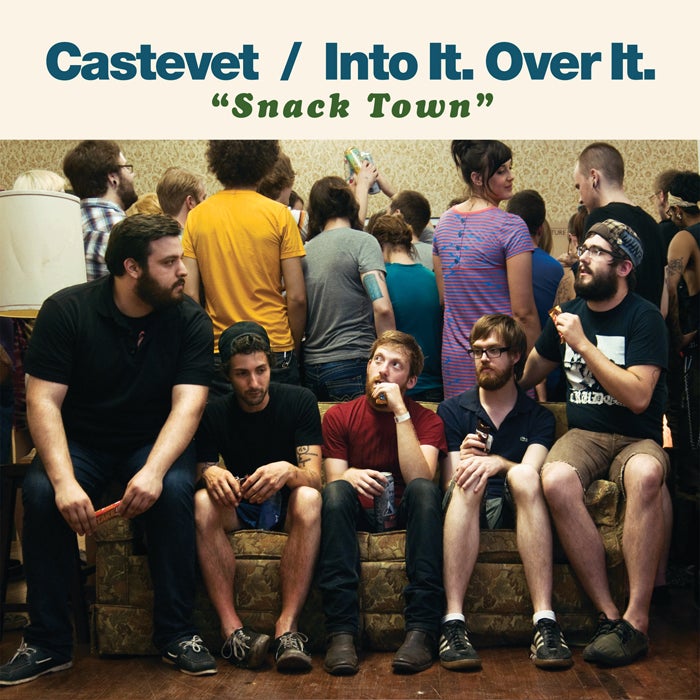 We have launched pre orders for the Into It. Over It. & Castevet split 7 inch titled Snack Town. For those of you who don't know, Snack Town is part a series of 7 inches that Into It. Over It. has planned called Twelve Towns and Evan has teamed up with good friends Castevet on this release which features four amazing tracks, two from each band.

Snack Town will be limited to a one time pressing of 500 7 inches (75 Gray, 100 Brown, 150 Cream, 175 Black) and will be available digitally as well from all retail outlets (soon) and directly from us.  We have a few different options for pre order and all orders come with an immediate download of the album:

We also have a sweet exclusive Into It. Over It. shirt available here.

We've added a few items to our distro section. Castevet's The Echo & The Light LP and Everyone Everywhere's S/T LP. Don't forget that we still have a few copies left of the Into It. Over It. split 7 inch with Bob Nanna and Lauren Lo here.

We currently have a lot of bands on tour so be sure to check out when they are playing near you - Aeroplane, 1929, Big Kids, Lion Cub, My Heart To Joy, Pianos Become The Teeth & We Were Skeletons.

Right now, we're out on the Vans Warped Tour with a booth, be sure to find us, stop by, and say hello.