Before heading over to the UK with You Blew It and The Early November, A Great Big Pile of Leaves will have a quick tour of the northeast with RX Bandits! Dates and info are below: 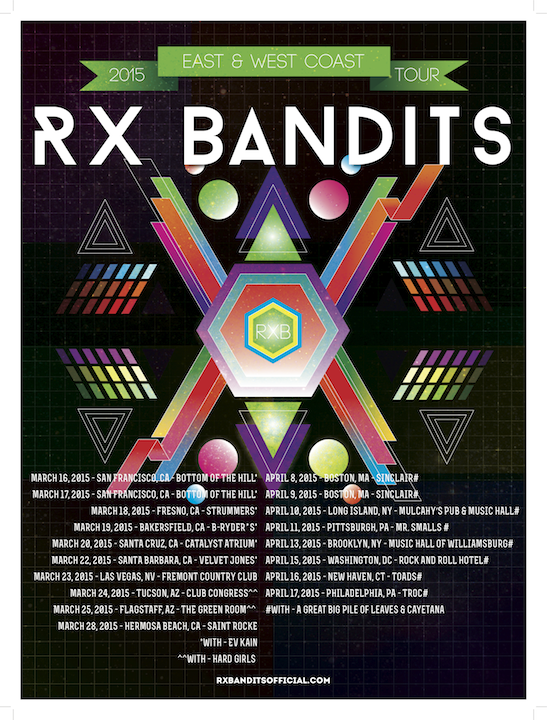 Later this spring You Blew It and A Great Big Pile of Leaves will be touring the UK with The Early November! Tickets are now on sale and dates and info are below: 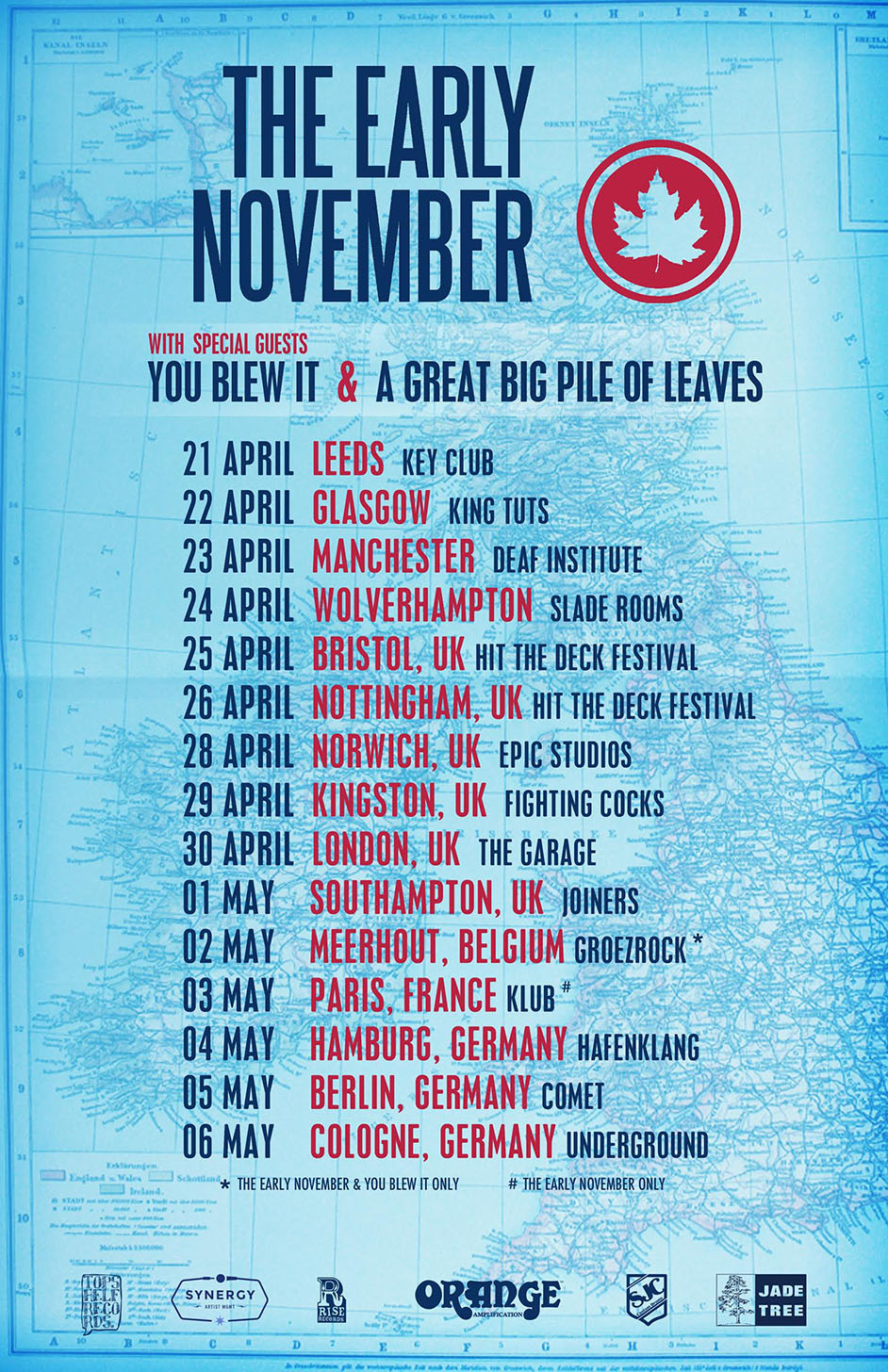 
#a great big pile of leaves
#you blew it!
∞ permalink

Fresh off of the release of their sophomore LP, You're Always On My Mind, A Great Big Pile of Leaves will be hitting the road a ton in the coming months with some great bands. Pre-orders are now up for A Great Big Pile of Leaves' follow-up album You're Always On My Mind! Listen to a new song from the album "Pet Mouse" (featuring Motion City Soundtrack's Justin Pierre) over on Purevolume. 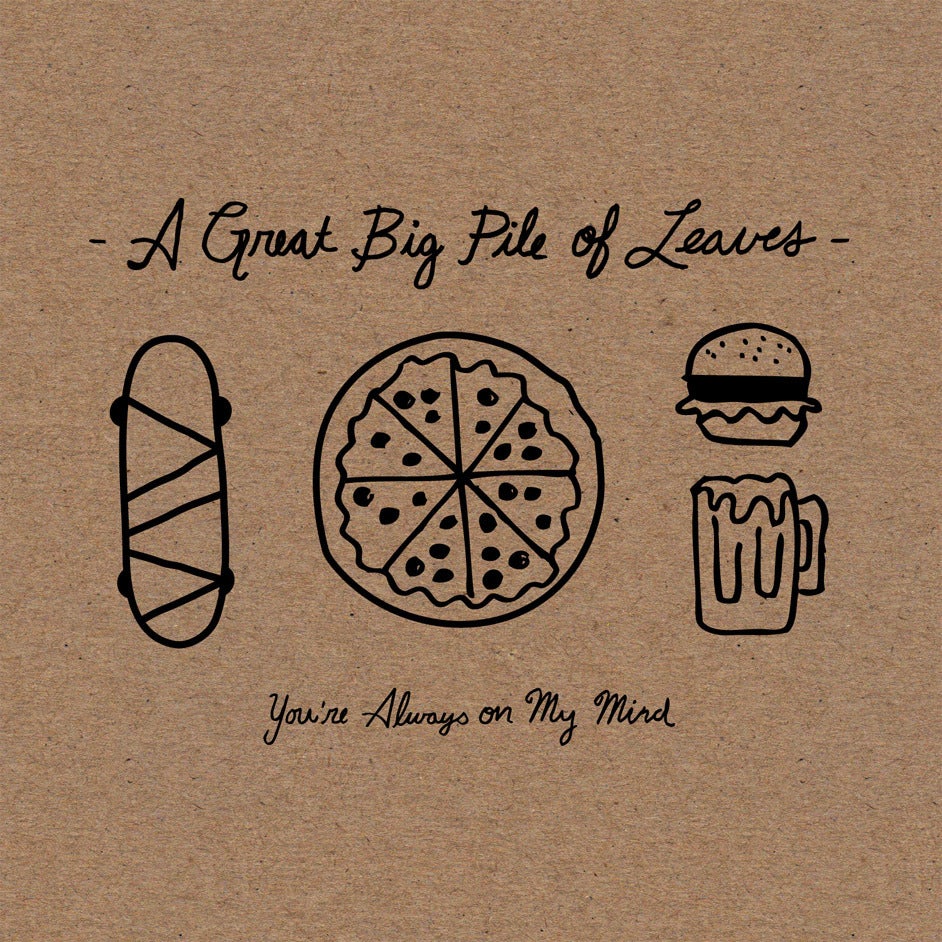 Thanks so much, everyone! A Great Big Pile of Leaves will also be announcing a handful of headline dates routing out to this tour and back, so stay tuned!

Brooklyn indie quartet A Great Big Pile of Leaves are thrilled to announce a brand new full-length studio album, You’re Always On My Mind, set for release on July 2nd through a continued partnership with Topshelf Records. The album serves as the follow up to their debut LP Have You Seen My Prefrontal Cortex? which was self-recorded and released in the summer of 2010. You’re Always on My Mind marks the band’s first full-length studio album with the backing of a label, and also their first time working with an outside producer. The band ventured from the East Coast to record the forthcoming full-length in Minneapolis last summer. They tapped Ed Ackerson (Limbeck, Soul Asylum, Polara, The Replacements) to produce the record and looked to Roger Seibel (Deathcab for Cutie, Andrew Bird, Bon Iver) for mastering.

Keep your eyes peeled later this week for summer touring plans around the release of You’re Always On My Mind. Details for the pre-order of the record are also forthcoming. SXSW. What a fucking headache, you guys. We've had a hell of a go with trying to put all of this together but we finally have it all figured out! RSVP here. Details are below!

This show is not an official showcase and is not affiliated with SXSW, cool?

We also have a few other parties and shows to unveil later this week — keep your eyes peeled! Be sure to RSVP for this show here!


#the clippers
#code orange
#empire! empire! (i was a lonely estate)
#a great big pile of leaves
#pswingset
#the saddest landscape
#slingshot dakota
#you blew it!
∞ permalink A Great Big Pile of Leaves will be hitting the road this winter with Mansions & Young Statues (Like, seriously — what a great lineup!). Dates're below:

Some of — what have become a handful of our best friends and all around favorite people — Pianos Become The Teeth, along with Topshelf newbies (but really nice people too, you guys!) A Great Big Pile of Leaves, have both released amazing new records today. We couldn’t be more proud to be associated with both! Here's what people have had to say about The Lack Long After:

The Lack Long After savagely forges ahead. As raw and messy as a picked scab, the album lacks in nothing... The Lack Long After isn’t just Pianos’ crowning achievement to date — it’s at the vanguard of post-hardcore’s much-needed renaissance. -Altpress

...an album that ups the ante and shows just how damn impressive this band truly is. Sprawling and stunningly engrossing...Album Rating: A. -Muzik Discovery

When you get the chance to hear this album, don't just throw it on and begin crawling around the Internet or cleaning your house. Take forty minutes, put on some headphones and follow along with every deep cut of Durfey's tongue. You'll probably sit there for a good ten minutes afterward trying to take it all in. That moment is a rare experience where music transcends a flat feeling of enjoyment into an overwhelming feeling of deep connection. That's when you know an album holds some sort of grander power. -Absolutepunk

A profound and engaging musical experience that displays why Pianos Become the Teeth are so damn good at what they do. -Sputnik Music

...an emotion-wringing journey of loss and struggle ...an album you will be moved by. -Mind Equals Blown

If you haven't gotten the record or checked it out yet, you can stream The Lack Long After at Rock Sound and read singer Kyle Durfey's explanation of each Track over on Altpress. If you haven't yet checked out any of A Great Big Pile of Leaves' new stuff yet, you can stream Live From the Living Room at AltPress and stream BOOM! at AOL's Spinner.

Aside from all that, we've had an absolute blast at CMJ and Fest — it was so great to meet so many people and hang out with so many new and old friends alike! Up next: Fun Fun Fun Fest... see ya soon, Texas!

Lastly, if you haven't yet picked up either one of these records you can do so in our store. They're both in and shipping! Thanks. Hey everyone! We're REALLY excited about our return to Fest this coming weekend! We've printed some exclusive merch, which we'll have all day at the flea market on Friday (at Holiday Inn) along with our entire catalog and a bunch of other free stuff. The image above is a shirt design done up by Ben Sears that we'll have for sale. Super limited so be sure to get to us early! We'll also have koozies (pictured below). Also below is info on when & where Topshelf bands will be playing throughout the weekend. See ya there! And now, for all your schedule making needs: