Today we released the final album from Enemies – a band who we have had the joy of working with and are sad to see go. This being said, Valuables is the perfect swansong record which The Line of Best Fit called, "a sinewy collection of guitar-led gold, with flickering licks and soothing vocals brewed together."

Buy/stream Valuables through any of these outlets: 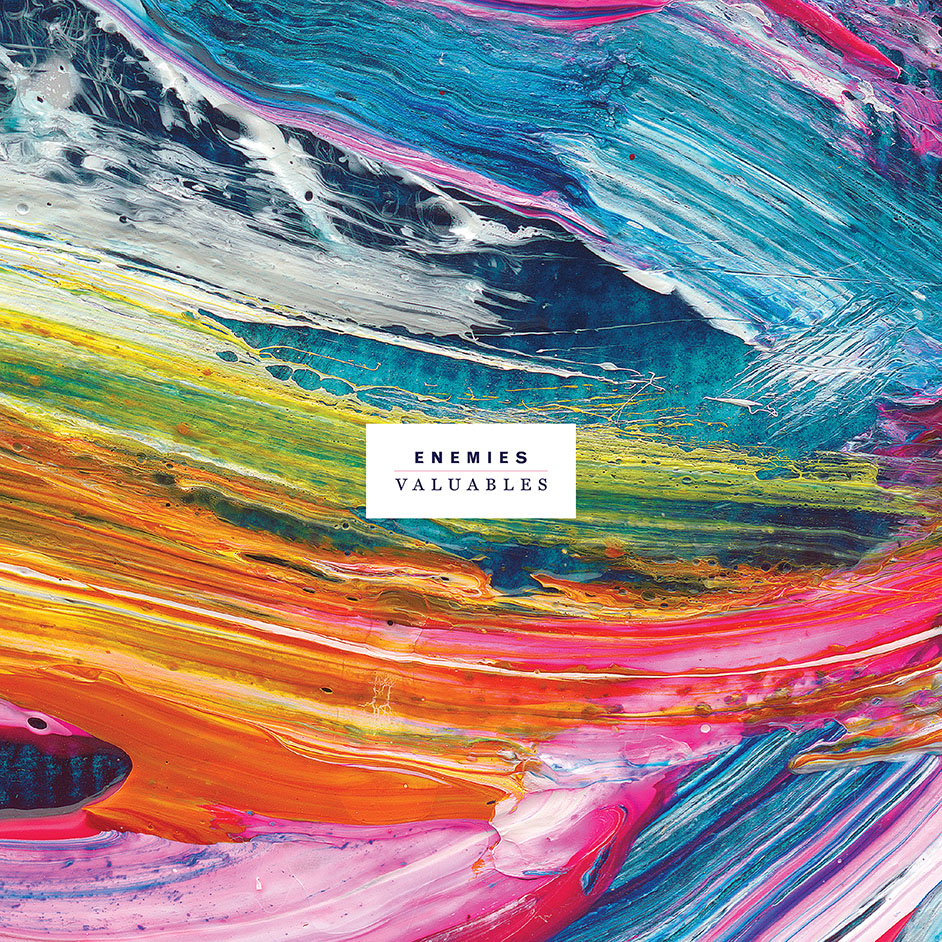 This is the band's final album, and they will be ending their time together with one last show at Vicar Street in Dublin on December 18th. You can grab your ticket HERE. 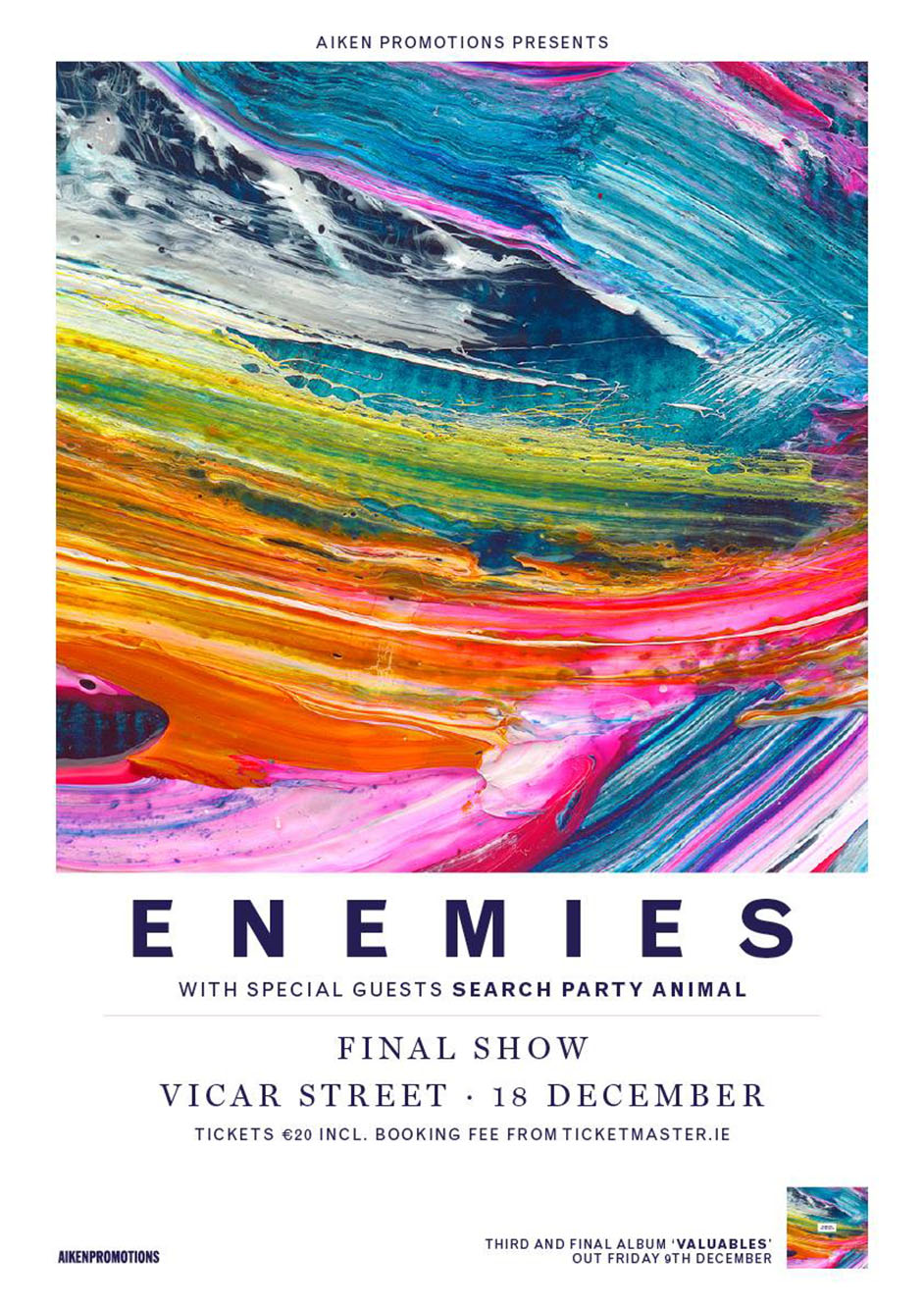 There was no way we were gonna have Enemies come over from Ireland and only play the west coast! ;) So, in addition to the band’s dates at SXSW and the west coast with Weatherbox and Prawn, the band will also be playing a handful of dates on the east coast (all dates are with Weatherbox) — info below!

Enemies (Kilcoole, Ireland), Prawn (Ridgewood, NJ), and Weatherbox (San Diego, CA) will join forces for a Spring 2016 tour kicking off in Austin, TX at the SXSW Music Festival. Tickets are now on sale in select markets!

For Enemies, this tour marks the Irish band's first North American performances since October 2013 and first real North American tour ever. They will follow up their most recent offering, Embark, Embrace, with a new release on Topshelf later in 2016. Catch all bands on the following dates: 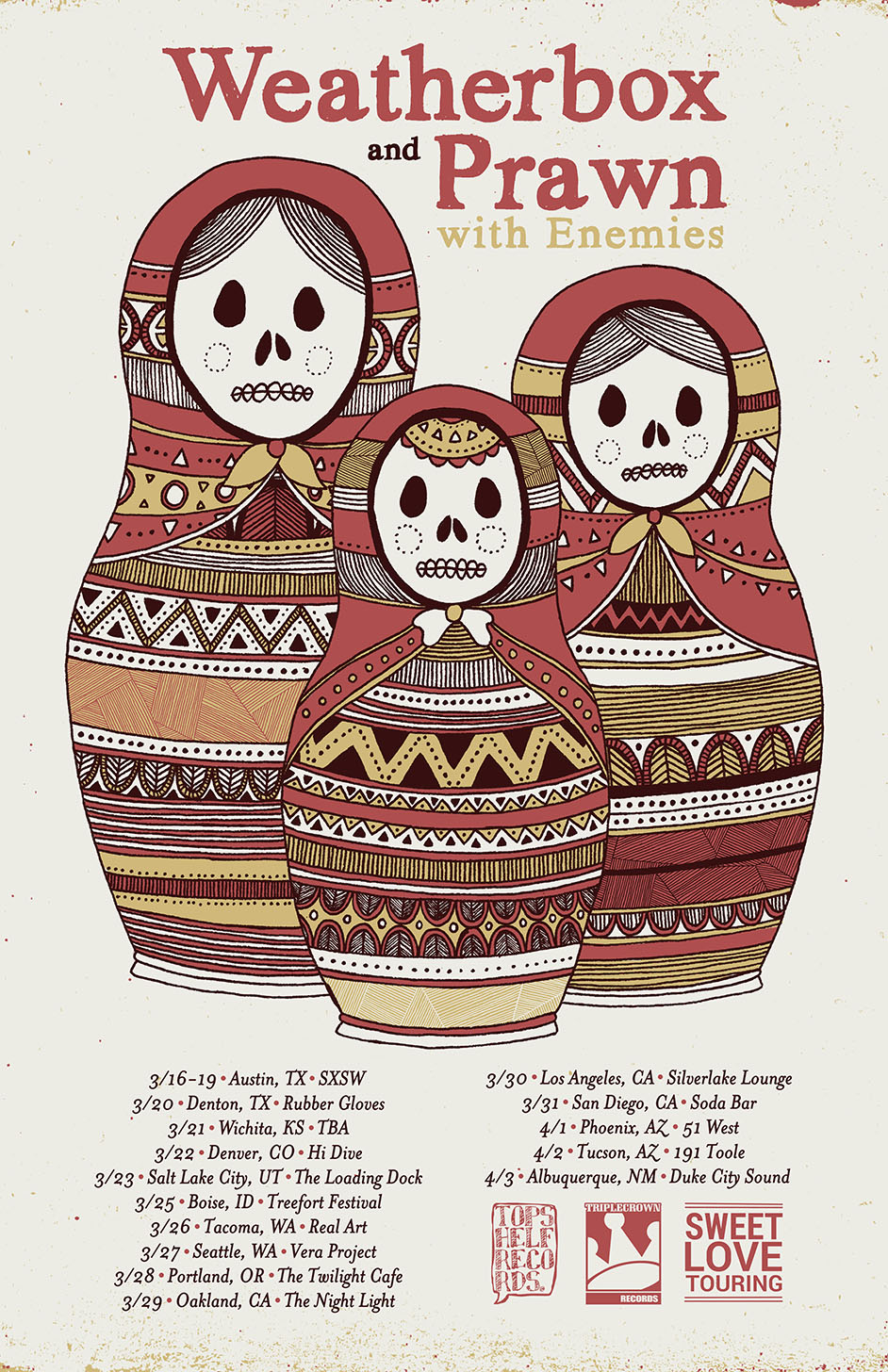 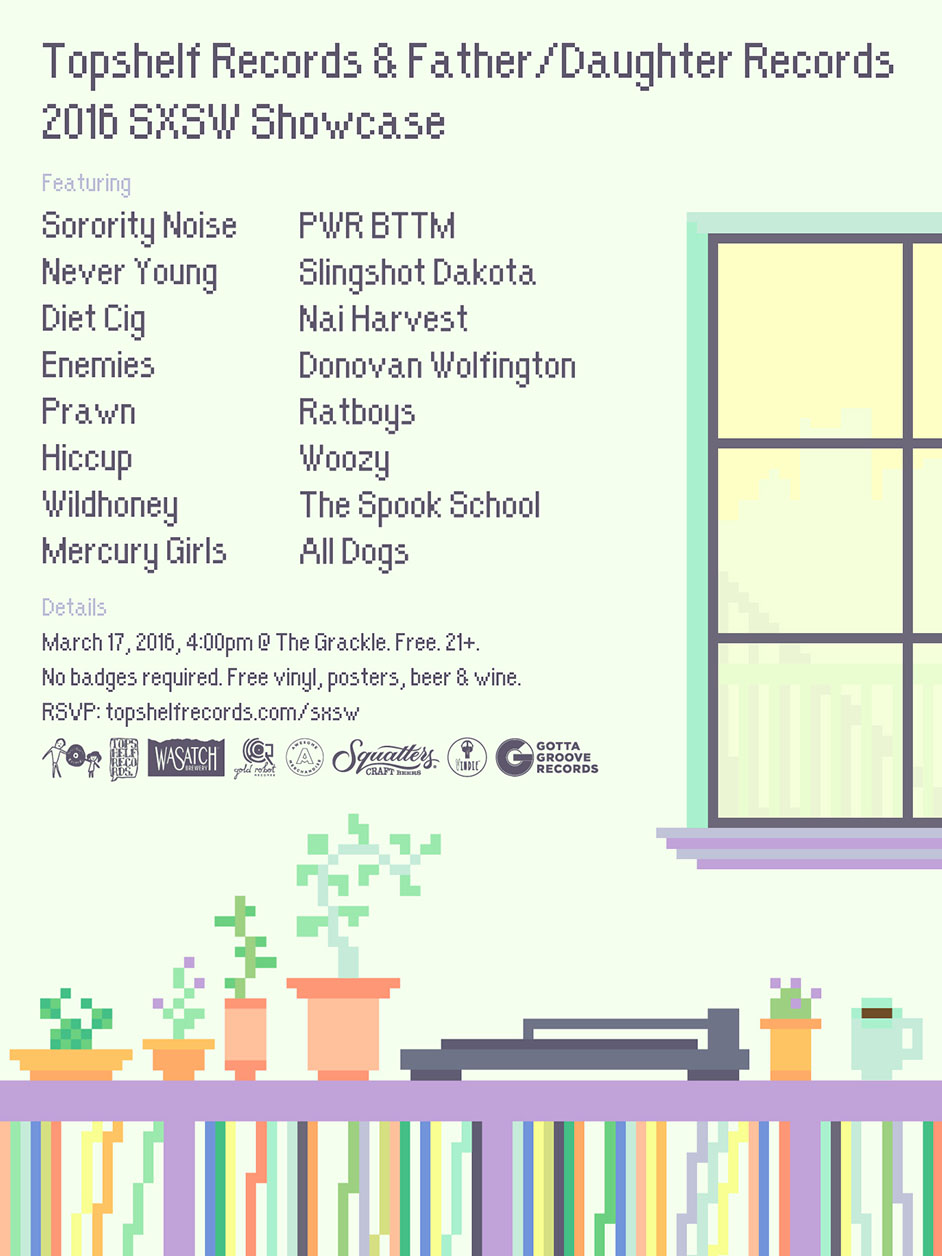 Admittedly, we want Enemies to stay state-side a lot longer than just five days in the northeast, but after scheduling an unreal world tour spanning Ireland, UK, Europe, Asia and the US, it just wasn't in the cards this time around. If you're in the northeast, be sure to check these out as most of 'em are free shows!

Never listened to Enemies before?

With the recent release of their brilliant second full length album, Embark, Embrace, Enemies will be heading out on a Southeast Asian tour to support it. Dates and info are below: We always try and make CMJ a really fun time, but this year's gonna be something else. We're getting The Jazz June to reunite, you guys!! A hugely influential band for this genre / niche, If you listen to most anything we've ever released, this band can almost assuredly be indirectly or even directly credited for it. We're honored and thrilled to have them onboard for this. Also playing will be Enemies (coming all the way from Ireland, no less), Caravels, Have Mercy & a very special ~yet-to-be-named~ guest. After the show, and between sets, Tom Mullen of Washed Up Emo fame will be DJing only the best of the best tunes.

We'll also have an exclusive, limited Edition 7-inch record for everyone in attendance featuring "Hundred Years" by Caravels and a previously unreleased song from Prawn.

Tickets are on sale right now and are going to sell out, so hop to!

Incase you can't read the print on the poster, here's all the info:

Two of our favorite bands and two of our favorite records, ever — released on the same day! Enemies' Embark, Embrace is an instant classic and toe's The Book About My Idle Plot On a Vague Anxiety is a completely unreal classic record. They're both out today and both bands will be coming to the US soon to support their respective releases. Below are details on where you can pick up or listen to each record, along with an update on the vinyl production of each. Thanks! toe - The Book About My Idle Plot On a Vague Anxiety

Vinyl update: the records are in, LP jackets are shipped to us and will be in hand this week, LP inserts will be in our hands in two weeks. This album will be shipping out the first week of September. Vinyl update: LP jackets and LP inserts are in, test presses have been delayed (we were told we'd have them weeks ago and still don't; we're not sure why. Kinda getting the runaround here and it's a bummer) so we'll keep you posted on this one via email. We'll be looking to rush production on these once tests are approved. At best, this will be shipping out in mid-september.

So, so, so stoked to announce this right now, you guys! We'll be working with Kilcoole, Ireland's Enemies to release their new full length record Embark, Embrace on vinyl in the US (it's brilliant).

In the spirit of DIY, Embark, Embrace was recorded and visually designed by the band themselves, with engineering handled by a close friend, James Eager of The Hive Studios. The album will be the first release on the band's own label, Heavyweight Records with Topshelf handling everything in the US.

The title Embark, Embrace comes from the bands decision to set aside careers & college degrees and focus on touring as much as possible — an opportunity that has not been available to the band until now. Enemies are just back from a three week tour of Europe and plans to tour Asia & America are already under way.

The band recently made "Executive Cut" free to download from their bandcamp site. Details for the album are below: