For this week's feature I wanted to ask Oliver Kalb, the mind behind Bellows, to break down some of the inspirations for his latest album, Next of Kin. I know the full record isn't out until March, but I've already heard it dozens of times (sorry), and I'm drawn back to it over and over again by not only the incredibly catchy melodies, but also the rich, sometimes dense storytelling that only reveals more layers upon each re-visitation. In appropriate fashion, the art for this record (also produced by Oliver), mirrors those layers and that seemingly endless narrative that wraps in and around itself as it unfurls, an ouroboros of a full package. Oliver broke down five inspirations behind the album art and imagery for us, and I've highlighted some of my favorite takeaways. Read on, and enjoy!


Oliver -> "I draw all the album art for Bellows albums & I love doing illustrations for my musical projects. The music and album art feel very linked to me, and drawing my own album art feels like it’s a cool opportunity to fill out the world of the album’s songs, or to give different shades of meaning than the songs provide on their own. I love writing pop songs, but they’re such a specific type of emotion-giver. Like, to me the best pop songs are based on urgency, planting you right in the moment of an extreme emotional reaction to something - pain, or love, or epiphany - and making you feel those things with the singer, as if the thing is happening to both of you right in the moment it’s being sung. It’s kind of a weird sleight of hand of art, that you can give this illusion that the pain is current, even if it’s a recording that’s long removed from the thing the artist is singing about. Illustrations feel different to me, like they can give a much more panoramic feeling - if a pop song is myopic, an illustration (or at least my type of illustration) is a broad-minded landscape.

For the Next of Kin art, I was drawing from a bunch of really disparate images in my memory from traveling around the world as a touring musician. I noticed that the songs for this album felt yellow to me, so I was being guided by wanting to give an overall shade of yellow for the whole thing. That’s a big question for me each time I make album art: what color is the album? After I decide that there’s a sort of improvisation that goes on, of pulling images and scenes that feel like they’re connected with the album in some abstract way. Here are a few things I was thinking about when I was drawing the Next of Kin art:

I went to Frida Kahlo’s house in Mexico City a few years ago and was really taken with this collection of ex voto paintings she had displayed there. Ex votos basically are small paintings, usually painted on tin or a strip of metal that depict religious scenes, like a saint’s moment of self-sacrifice or the devil tempting someone. They each have a strip of text at the bottom describing the scene, often a primary colored bar like a bright yellow with red painted text, which gives these paintings a sort of comic-book-like appearance, even though they’re serious religious offerings. The name “ex votos” comes from the fact that the paintings are votive offerings, meaning they’re meant to be left in a sacred place as an offering to gain favor with supernatural forces, and never reclaimed again.

I liked the idea of these little scenes of everyday life being offerings to become in better spiritual standing, so there are these scenes on the front cover of little moments of memory in Asheville, NC that come from my memory. It’s important that they’re votive offerings because Asheville is the location of a kind of spiritual force I describe on this album that may or may not have power over human lives. 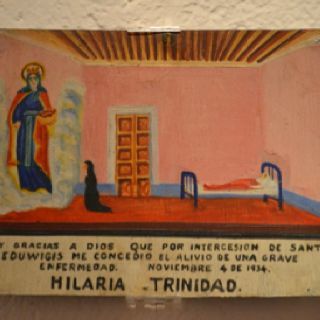 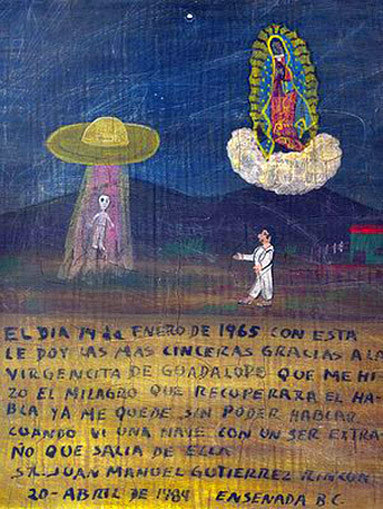 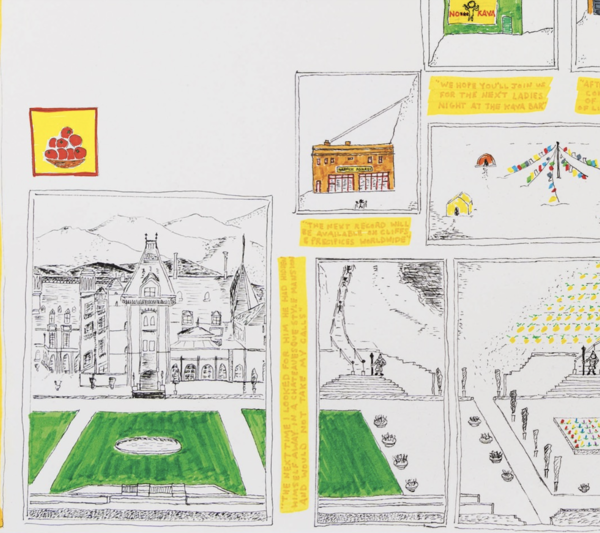 
In 2013, when I was on tour with my other band Told Slant, we stopped at a kava bar in Asheville, NC and were warned by the barista that the “quartz had activated” under the mountain in Asheville and that people might be acting strangely as a result of that. We didn’t know what she meant, but we thought it was funny / cool to be in a hippie mountain town that believed it was being controlled by the workings of a crystal buried under the mountains. That warning stayed with me though, after things in the world and my life started getting weird in the following years - like, what if it was true that a tectonic shift had taken place and that people were behaving in increasingly stranger and darker ways because of this crystal? In any case, the song “Biggest Deposit of White Quartz” from the album is about this idea, and that sort of became the main visual idea of the album cover - crystals buried under scenes of human life, malevolently affecting things in the lives of people on the surface. 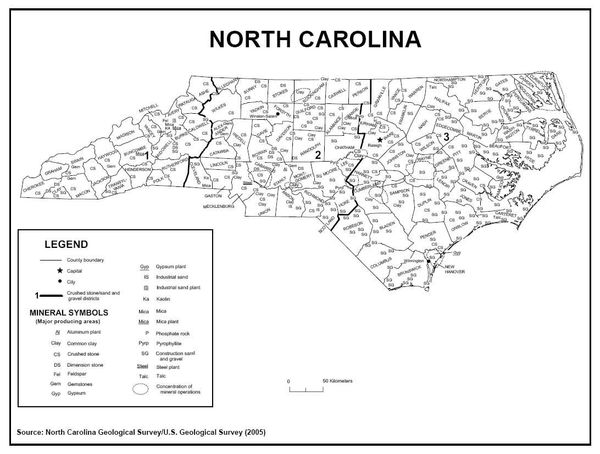 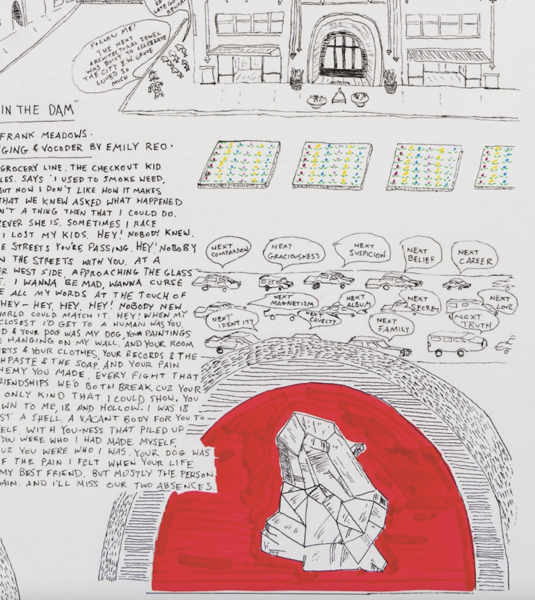 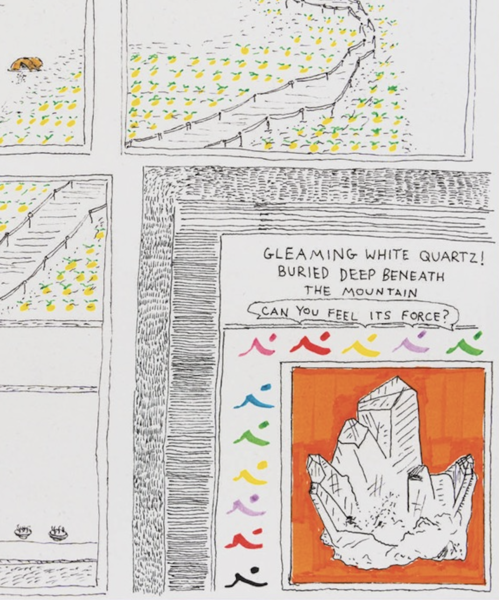 
I think the most beautiful place in the whole world to me is the Amalfi Coast in southern Italy. It’s a coastal area on the Mediterranean where ancient pastel colored houses are built right along the cliffside that overlooks the sea. It’s like a seamless mesh of these pastel houses built right on vertical cliffs so the houses feel vertical too (John Steinbeck describes this area really beautifully in “Positano”). The most stunning and alien thing about the Amalfi Coast though is that the whole area is covered in lemons. Lemon groves are incorporated seamlessly among the houses, and weirdly the lemons grow huge. They’re like the size of a human head. I was thinking about these lemons a lot when I was making Next of Kin. In a kind of fantasy flourish, I drew the twisting lemon groves from this Mediterranean coastal area gathering all around scenes from Asheville - the interior album jacket features a bunch of places in Asheville, NC, but absurdly these North Carolina places are placed alongside the fantasy lemons. I don’t know why but the record smells of these lemons to me - songs like “In a Ballet”, I’m trying to summon the alienness of these glorious lemons. 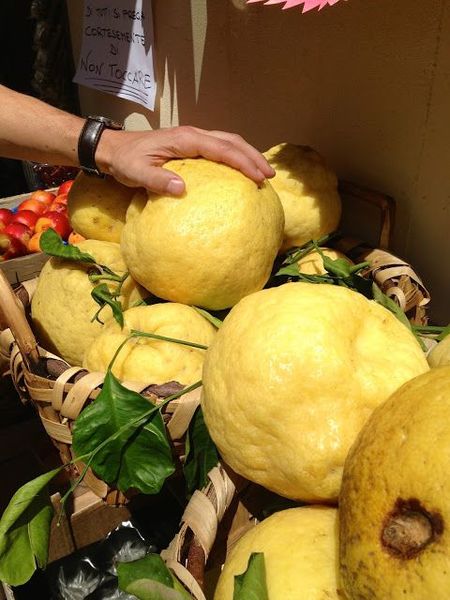 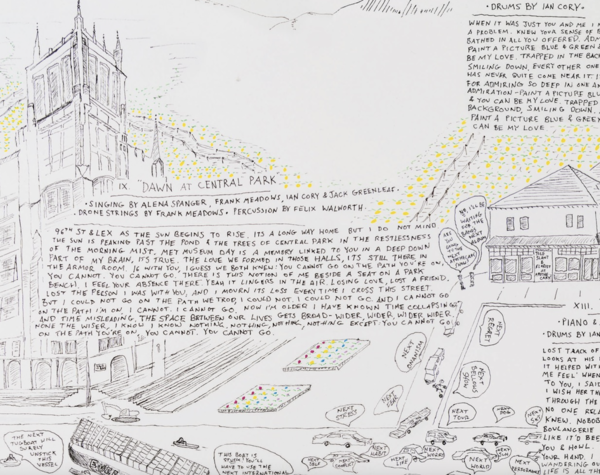 
I’m interested in the ways in which people manage to not be living their lives. Like, how in any given moment you can be taken away from an appreciation for what’s happening and pulled into the conveyor belt of NEXTs. What’s happening the next day? Who’s the next band? When’s our next tour? On the back cover of the album, I’ve dramatized this idea to a petulant extreme: NEXT LOVE, NEXT FRIEND, NEXT DOG, NEXT FAMILY, NEXT BELIEF, etc. Like, I think I wanted to extrapolate outward about the limits of the future-oriented model for life, always impatient for the next thing – is anything so important there can be no next of it? No replacement? I’m being angsty and sullen here, ironizing and clapping back at this “next” idea I was feeling troubled by. 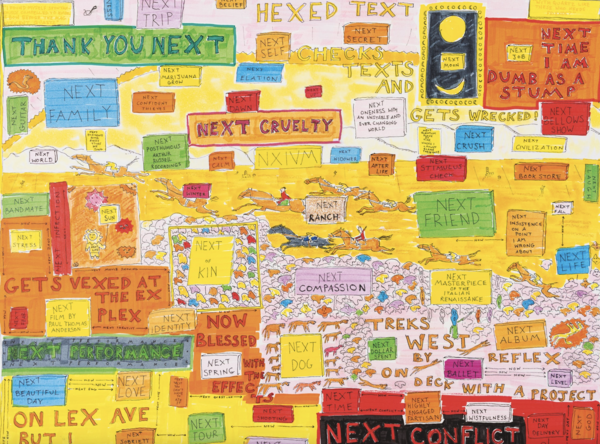 When I went to Japan a few years ago I was really obsessed with how all the records and CDs in stores over there have these strips of paper tied around the left-hand side with details about the album. They’re usually a single color with a lot of vertical info, like track lists and stuff like that. I loved them, I thought they were such a cool visual design compliment to the album covers, and I started really wanting to put an obi on my own album. As it turns out, Topshelf started adding obi strips to vinyl shortly after I had this observation - but I was so into the way obi strips made album covers look that I actually built a strip on my own album cover just cuz I like how the vertical rectangle shapes the frames on the album cover. So this record will have 2 strips. One original and one actual obi." 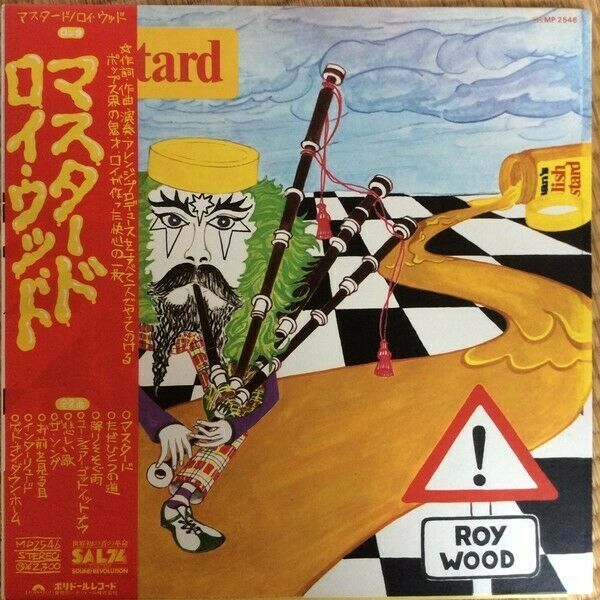 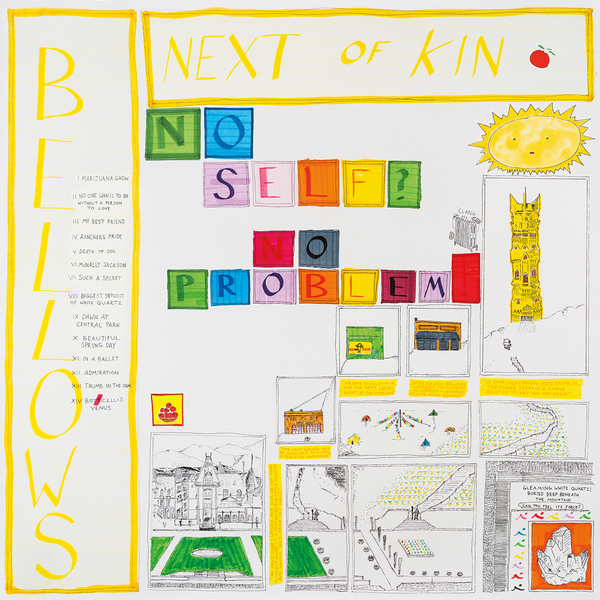 Mack -> Back here at the end to let you know about the very cool merch that Oliver has designed to accompany Next of Kin with some of this NEXT & malevolent quartz imagery. No Self? No Problem!

It's also worth noting that most of these illustrations by Oliver are taken from the album art, and the gatefold design, which you can hold in your hands if you pre-order Next of Kin on vinyl :~)