All the way from origins in the Northeastern US, The Saddest Landscape is making their way to Japan and Southeast Asia! Tour dates listed below: 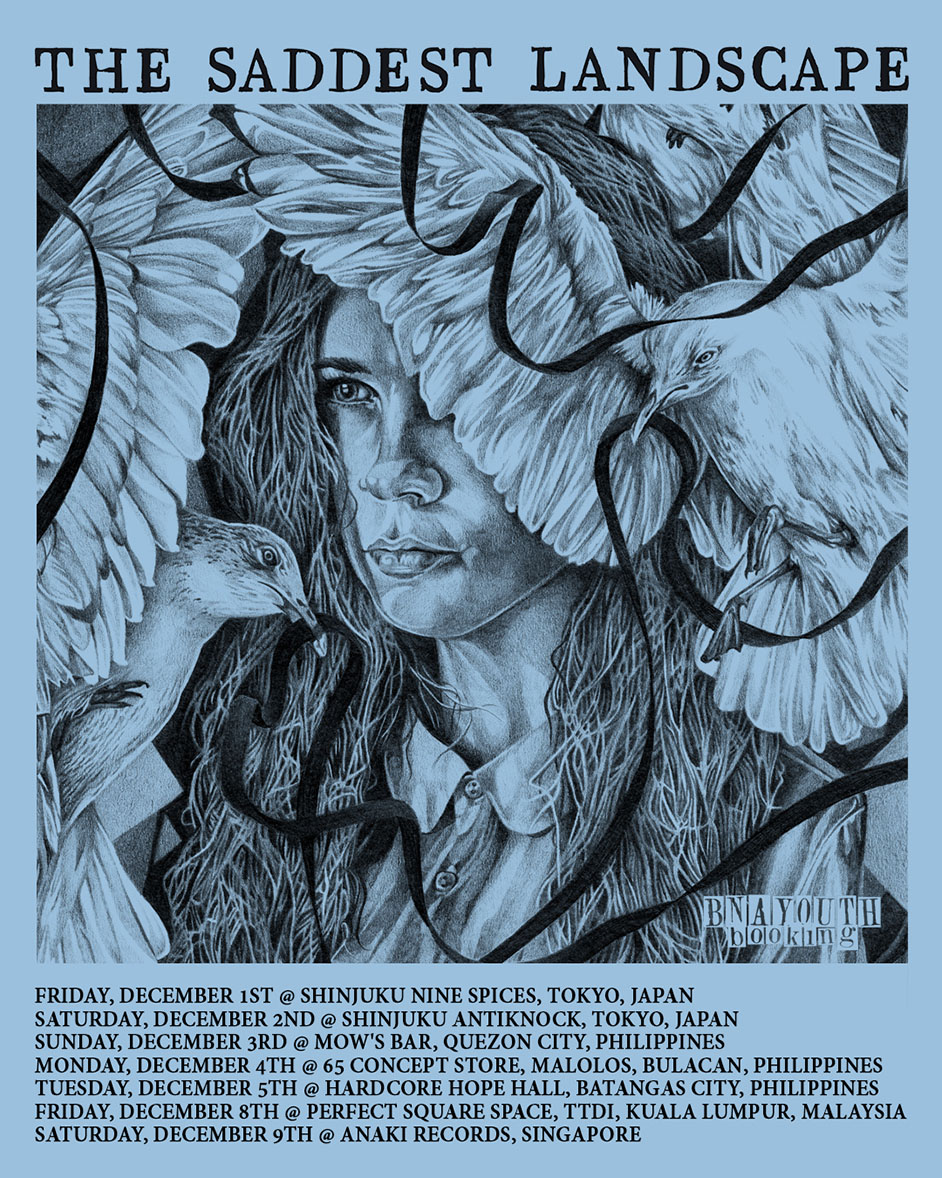 The Saddest Landscape will tour throughout Australia in May in support of Darkness Forgives — dates and info below: 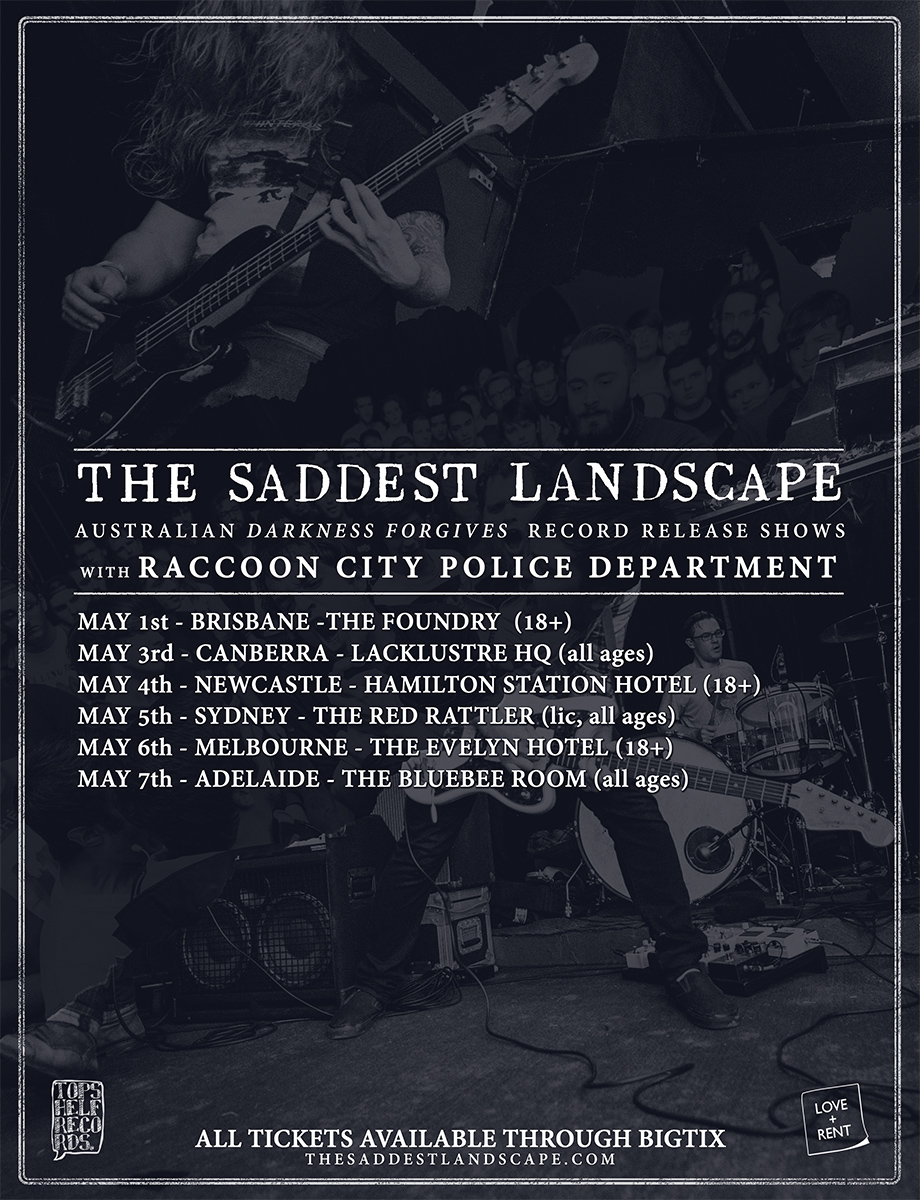 The Saddest Landscape begin their US tour this weekend! Dates and info are below. You can also listen to their new album and order a copy on CD, cassette, vinyl or digitally. 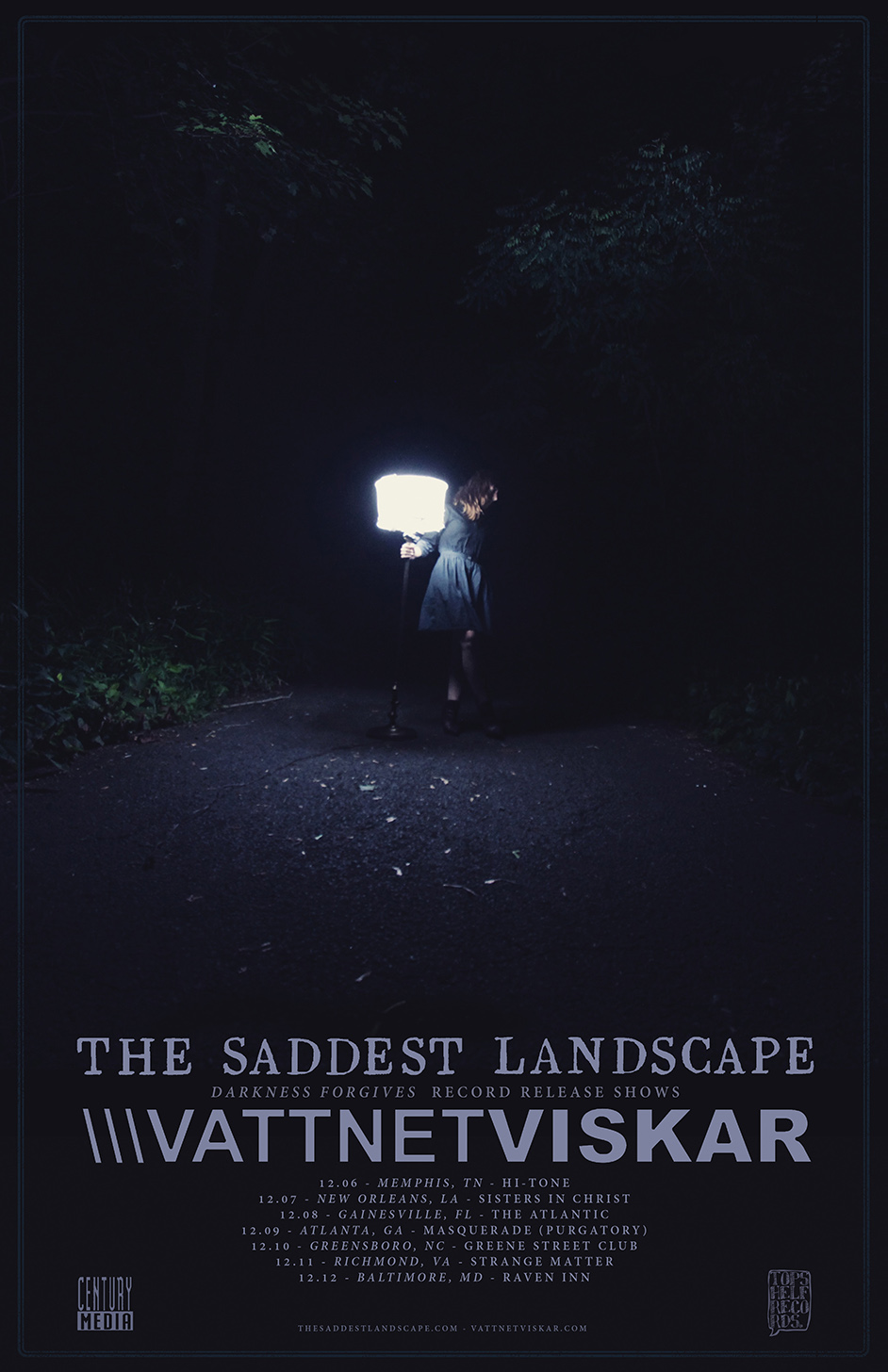 
#empire! empire! (i was a lonely estate)
#the saddest landscape
∞ permalink

This fall, The Saddest Landscape will be touring the US with State Faults, Empire! Empire! (I Was a Lonely Estate) and Vattnet Viskar! Dates and info are below and tickets are available now. The band also has a new full length coming out soon which you can see all the details for here. 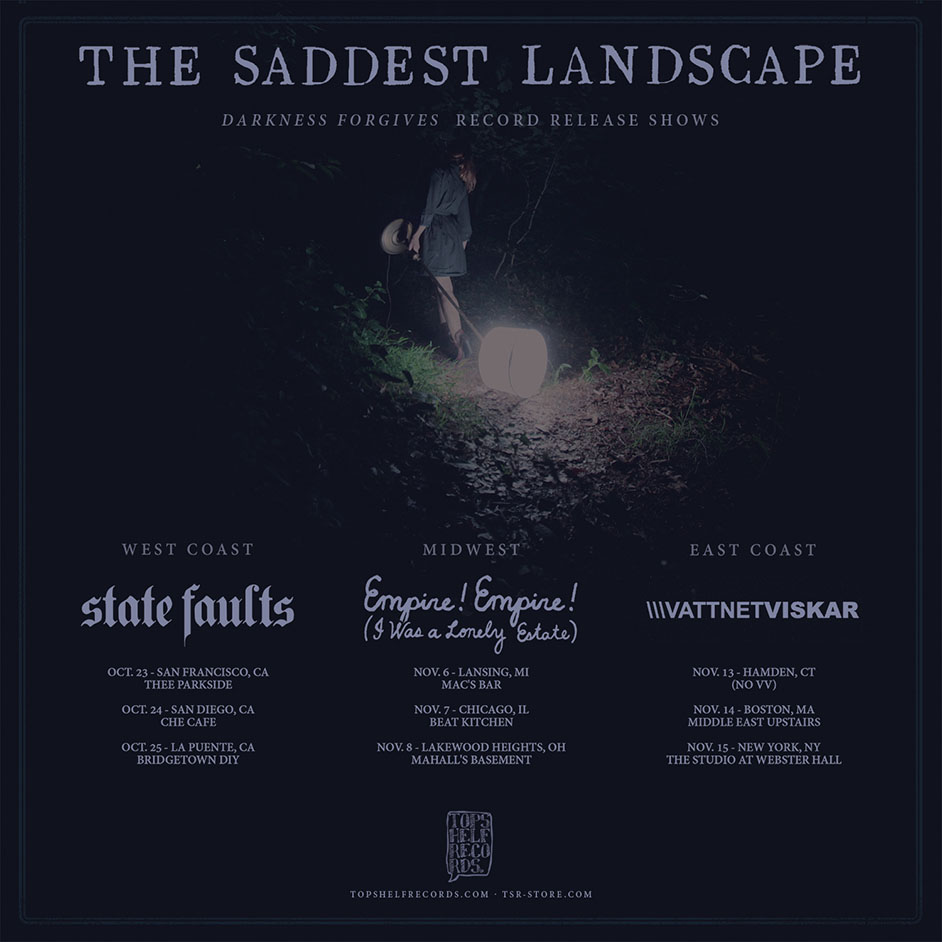 w/ Empire! Empire! (I Was a Lonely Estate)

It's been three years since The Saddest Landscape last released a full length album. Which might seem like a long time for an active band, until you consider the myriad of splits and EPs they've released in the interim. 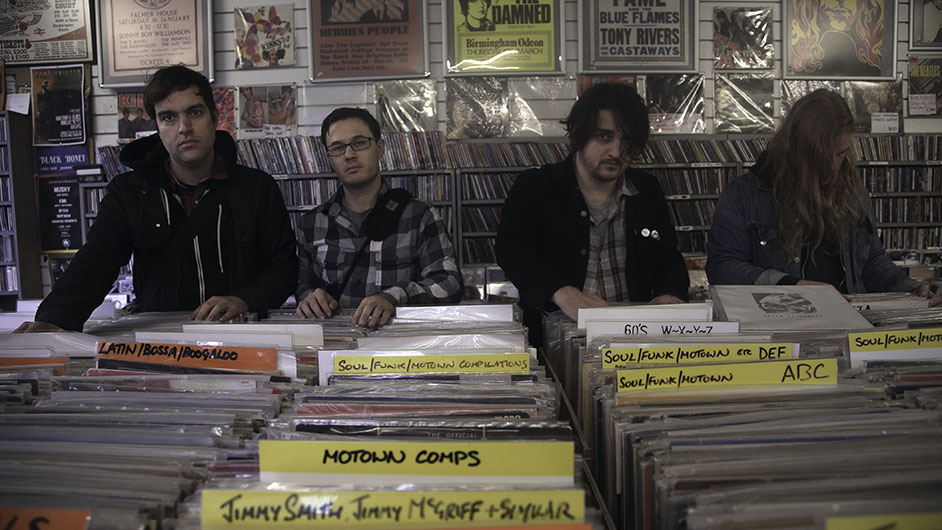 This time around, the band will be enlisting the help of Jay Maas (Title Fight, Ceremony, Defeater) to record the as-yet-untitled studio album with recording beginning today. You can follow along with the band's progress and enter to win prizes by signing up for the band's mailing list.

With their collaborative split with My Fictions When You Are Close, I Am Gone due out later this month, The Saddest Landscape are headed out on tour to support it. Check out the dates and info below: Pre-orders for The Saddest Landscape & My Fictions' split When You Are Close, I Am Gone are now up! A truly joint effort between two awesome bands we're so happy to call friends, this EP features three tracks — one from each band — and a thirteen minute collaborative track. Below is a teaser for the split that our good friend Zac Suskevich put together for us last minute.

The artwork for the record prominently features the photography of Frank Vic which perfectly suits the feel of this record. We also have a pre-order package that includes a poster designed by my good friend and roommate, Adam Vass. 
#my fictions
#the saddest landscape
∞ permalink You can grab The Saddest Landscape's Exit Wounded from the following places: You can grab The Saddest Landscape's Live EP from the following places:

If you've pre-ordered either record (or both) download codes will be going out to your email inbox tonight! Thanks!!

Today we're excited to share with y'all that we'll be releasing the newest EP by The Saddest Landscape entitled Exit Wounded. The band recorded the 5-song EP this past winter with Jon Taft at New Alliance. The EP will be released on 12 Inch vinyl and digitally on June 11th. Per usual, the packaging's gorgeous and the band continues to get better with age. Look out for pre-order, track info and album art next week!

The Saddest Landscape are commemorating their 10-year anniversary by self-releasing and re-issuing their long since out-of-print first two albums. The band has launched a Kickstarter to aid in their efforts and we'll also be releasing Redefining Loneliness — a limited edition 7” this fall! Here's the scoop, straight from the band:

Why these releases… and why now?

We recently reached the 10 year anniversary of when we first started The Saddest Landscape, something we’re very proud of. We’ve never operated like a normal band should- the fact that we’ve never actually lived less than a few hundred miles away from each other has meant we’ve constantly had to get creative and put in the extra work to do the things that a “normal” band does- writing, recording, traveling, just even hanging out has always been a challenge. And then there’s the real life thing…. Serious girlfriends, wives, serious jobs. Combine the distance with the craziness of adult life and it’s actually pretty insane that we’ve been able to keep this going for so long. So we want to celebrate that. And being the dorks we are, putting out more records seemed like the best way to do it. The reason we are doing these records specifically is that all of our newer stuff is in press, but the older stuff from our early days is not. We're fortunate enough that a new generation of kids have taken an interest in us recently, but most know us in our current form. This is a way for us to look back and celebrate our early days with a whole new group of people.

Honestly the Kickstarter thing is a little out of our normal comfort zone. We debated for a while if it was something we should actually do. The thing is, people have been asking us for a while how to get our early records on vinyl format, and people also ask rather frequently how they can support our band in general, which is very flattering. The Kickstarter thing seems like a means by which we could potentially achieve both of those things at the same time. We’ve put out enough records on our own to know, that vinyl releases are no easy feat, especially financially. The reality is that putting out high quality records is not cheap, and not something we can afford on our own right now to be completely honest. When we put out the You Will Not Survive album, we actually offered fans a small quantity of limited versions of the LP, being fully transparent that the proceeds were going to help towards getting the record released. So we basically tried it before on a very small scale. We’re going to try it now on a larger level, and if it works and helps us put out these releases with all the bells and whistles we want for them, awesome. If not and it doesn't work, no harm no foul. If it does, though, we’ll be able to press some records, box sets, other merch, pay our practice space rent and have the financial flexibility to travel and tour a little more, too.

Why do it on your own instead of through your label, Topshelf?

We have a lot of projects lined up this year... so much so that we didn't want to burden Topshelf with it all as we know how much work this is going to be. We originally were planning on self-releasing our Tattoo 7”, but realized between this and other things we were thinking about doing that we couldn’t afford to do it all. So Topshelf stepped in and offered to help us put that one out (plus some other stuff this year that we’re working on currently). But yeah, no bad blood whatsoever. They are incredibly supportive of anything we want to do, and have been a tremendous friend to our band over the past few years. It just seemed to make the most sense with this one for us to self-release it. Plus, we’re anal as hell when it comes to vinyl packaging so we’d probably just end up driving them crazy in the process with all of our dumb and expensive requests.

Earlier this year the band revealed plans to reward their diehard fans, by offering a free 7” (shipping included) to those that submitted a photo of their The Saddest Landscape tattoos. The 7”, titled Redefining Loneliness, will be released by us this fall — more details on that soon!

Make sure to check out the generous packages available through the band's Kickstarter because they're going fast!